What is an Obeya The Obeya is a physical or digital space where strategy meets execution. The Obeya approach builds alignment and ownership across diverse groups of stakeholders to solve complex problems, drive cultural change and get work done. It is not just a facilitation style – it is a way of working, thinking, designing solutions and fostering innovation.

“Obeya is a method where multiple information sources are combined for optimal decision making, involving multiple parties simultaneously. This makes it an excellent governing model for organizations that work Agile, Lean, or plan to do so!”

What is the Obeya Methodology?

In short: it is a method where multiple information sources are combined for optimal decision making, involving multiple parties simultaneously. This makes it an excellent governing model for organizations that work Agile, Lean, or plan to do so!

The Obeya model is an inclusive organizational model as opposed to the hierarchical organizational models. So, an Obeya makes it possible to “design” for collaboration. In an Obeya strategy meets execution and (quite literally) the people involved in these subjects respectfully engage in conversation with each other.

As organization you can now provide answers to the following questions:

The best guidance on how to build or improve an Obeya are the 11 Obeya principles composed by the Obeya Association in 2020.

Obeya or Oobeya ( from Japanese 大 部屋) literaly means “large room” or “war room”. Toyota put Obeya into practice back in 1993 launching their first Prius as a part of the Toyota Lean Manufacturing System. Takeshi Uchiyamada, a Toyota Chief Engineer, was given a difficult challenge: designing the car of the 21st century, with very aggressive fuel consumption targets.

In less than three years, the first hybrid car, the Prius, was brought to market – 15 years ahead of the competition

To pull off such a feat, the Chief Engineer also had to invent a new product and process development approach. He designed a new kind of visual management, which has since spread across Toyota engineering offices: the Obeya.

Analogies have been drawn between an Obeya and the bridge of a ship, a war room and even a brain. If you think of an organization as a nervous system, then Obeya would be the brain of the system. It is where information comes to be synthesized and digested, then analyzed and prioritized. Finally, the aim of all this information is to take well informed decisions, using both the power of information as well as involving multiple parties simultaneously..

An Obeya room is a central location in which everyone involved in the value creation process can meet to brainstorm, generate ideas, ask questions, and debate. Obeyas are typically set up with the walls plastered with posters, whiteboards, graphs, and all other relevant information to the project displayed in a clear and logical manner. Obeya rooms fuel creativity, break down silo barriers and increase collaboration on all levels while developing problem-solving skills. An Obeya room can be intended to shorten the Plan-Do-Check-Act (PDCA) cycle. There even is a physical Obeya method where the walls are structured according to PDCA principles.

Often the rooms have iterative meeting rhythms in which the timespan between two Obeya meeting iterations is short (say 2 weeks). This rhythm allows for Continuous Improvement, which is best executed in multiple consecutive small steps instead of an approach that aims for a single solution.

However, the Obeya is not just about the room only, or the visual representation of information. Ultimately Obeya rooms are about installing routines (‘Kata’) to collaborate, manage the business and solve problems more effectively. Otherwise, even though the Obeya room may be visually eye-catching, that may be all it is. How does an Obeya work?

The Obeya provides an advanced visual representation of the relevant, planned work and work in progress of a group of people in an organization, supporting their frequent meetings and their drive to continuously improve group performance, while taking their shared strategy to execution and professionalizing collaboration across teams.

Visual Management is an important Lean practice used to inform and involve anyone in the process, and quickly allow large groups of people to see what is happening. The workflow (gemba) is the most important source of information and for staff to constantly understand what is going on around them, visual methods are a perfect way to get messages across.

Why use an Obeya? 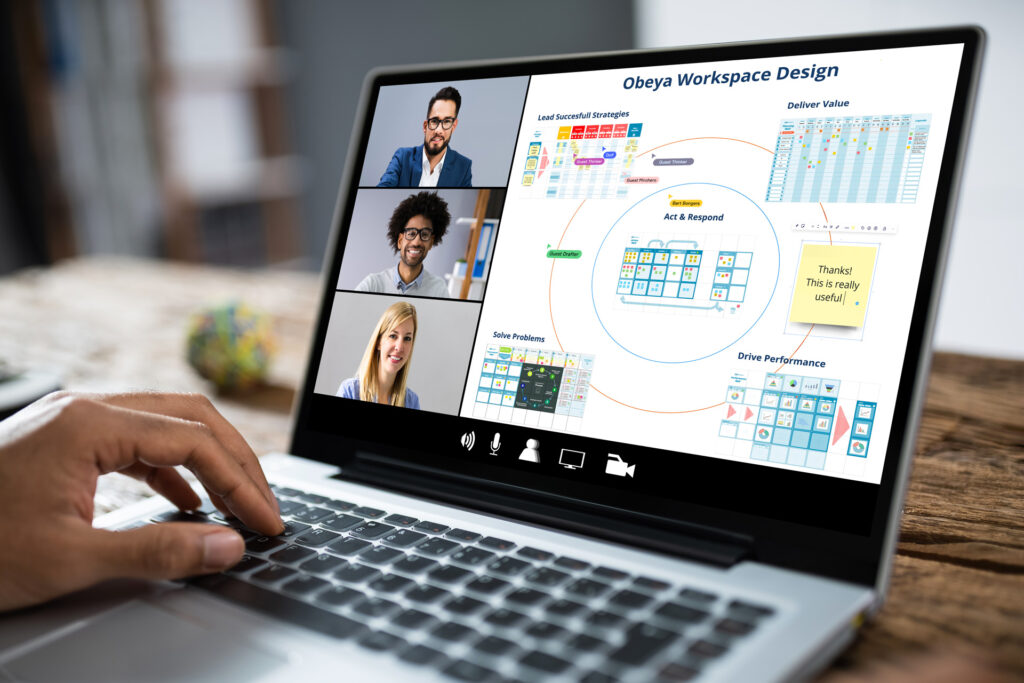 Curious how we can help you set up your Obeya Room? Find out more on AgileWalls.com 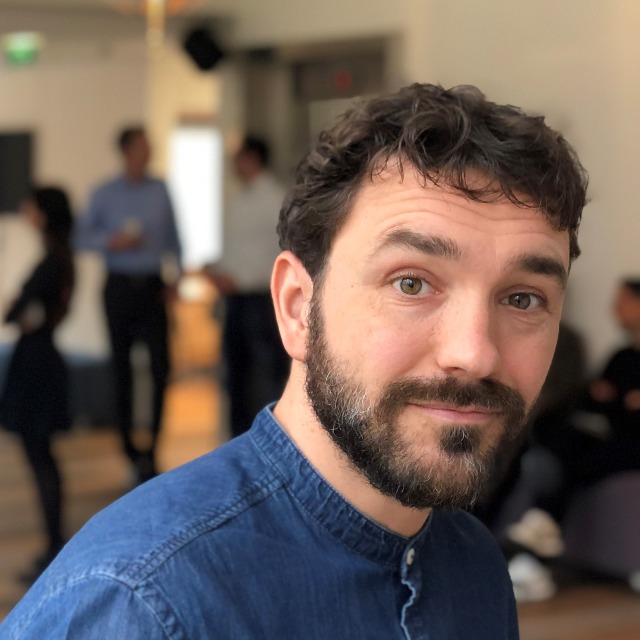 The office as we know it has changed severely over the last year. Remote working is here to stay. Obviously this has had an impact on the use of visual management and Obeya Rooms.

We see organizations replicating their physical Obeya Room in online whiteboard collaboration tooling such as Mural or MIRO. Or we see companies starting out with Obeya digitally from scratch, without ever having had the full blown experience of a physical Obeya.

So what are best practices in setting up a digital Obeya? And what are the pros and cons considering digital vs physical Obeya Rooms?

“A digital Obeya really speeds up starting to work with Obeya. No more hassle in finding the right room or walls in the office to claim as the Obeya.”

Upsides of using a Digital Obeya

Build your Digital Obeya on any online whiteboard tool with AgileWalls

Pitfalls of using a digital Obeya

Although there are many benefits working with a digital Obeya, there are some pitfalls to take into account:

Using video conferencing tooling  it is easy to miss the non-verbal communication through body-language, which takes up to 55% of all communication (Mehrabian, Albert (1972). Nonverbal Communication).

In my personal experience; sometimes real conversations and people are reduced to ‘voices in my ear’ while I am focussing on something else on my screen. Behaviour I would never show in a face-to-face situation!

We have seen digital Obeya’s that are so packed with milestones, metrics, data and information that we would be totally lost and miss seeing the big picture that we are used to see in a physical Obeya.

Curious how we can help you set up your Obeya Room? Find out more on AgileWalls.com

Miro was known in the past as RealtimeBoard, an online collaborative whiteboard platform that unites teams together and allows smooth online brainstorming, it offers infinite zoomable canvas and web whiteboards that enable teams to keep everyone in touch by seeing the big picture alongside the details. As software, Miro can be used to write down notes, create designs and communicate through video calls or online chatting. It allows adding many types of content such as texts and images with visual templates to help to explain different ideas and communicate more efficiently.

Some of the best features that Miro offers:

Miro helps teams go beyond just brainstorming, as it has many features and tasks that ensure collaboration within the team such as workshopping, strategy mapping, Agile ceremonies, UX research, product development, customer discovery, and process visualization.

Miro is not the only online Whiteboard tool on the market. Learn about i

“Miro’s infinitely zoomable canvas and web whiteboard enables you to work the way you want to. Unleash your creativity, plan projects from all angles, and create centralized hubs of information to keep everyone in the loop. See the big picture and the details.”

How to use Miro

If you don’t know your way around this platform, multiple resources can be reached easily to learn more about how to use Miro and benefit from all its features.

Why use an online Whiteboard

How to integrate Miro and Obeya

As the main aspect of visual management, Obeya methodology (a Japanese word for “big room”) is a Lean concept that is used to structure work, strategize and plan projects within Obeya Rooms. Integrating Miro as a virtual whiteboard with Digital Obeya Rooms can help:

Generally, integrating Miro and Obeya can lead to significant results through improving communication and collaboration, consequently better results in any project, it can offer a virtual space where everyone can be part of the same environment

Mural an online tool that’s used to enable teams to collaborate visually and innovatively by offering solutions to overcome their challenges. It enables team members to share their ideas visually and virtually which leads to more efficient communication and collaboration. It’s a collaborative space where teams can organize their ideas in different ways such as lists, flowcharts, frameworks, and drawings.

Here are some of the features that Mural offers:

“Communicate visually using sticky notes, flowcharts and mapping, drawings, and so much more. Then keep collaborators productive and engaged with voting, timer, and celebration features.”

How to use Mural

Mural is a place where you can map all kinds of content, like a giant canvas that can be customized however you desire, as it has many features, learning how to benefit from all of these features is crucial. Multiple resources give guidelines and information on how to use Mural as follows:

Mural is a digital workspace intended for visual collaboration in teams, it provides a space to simplify complex challenges visually, and organize different processes on any device. Besides its many distinctive features explained above, Mural has a lot more to offer:

How to integrate Mural and Obeya

Obeya (as part of Lean) offers a space to brainstorm ideas, plan, and structure work. If Digital Obeya Rooms are integrated with the tools that Mural offers, significant results can be achieved, as both sides have a lot to present which contributes to the progress of a project or an organization. Obeya helps identify problems and adjust the plan accordingly, with the right set of tools that Mural offers this process can be done more effectively. Here are some of the main accomplishments for integrating Mural and Obeya:

Both sides have a lot to offer, and if integrated within a project or an organization, they can drive significant results.

Posted by admin on March 1, 2021 | Featured
Manage Cookie Consent
To provide the best experiences, we use technologies like cookies to store and/or access device information. Consenting to these technologies will allow us to process data such as browsing behaviour or unique IDs on this site. Not consenting or withdrawing consent, may adversely affect certain features and functions.
Manage options Manage services Manage vendors Read more about these purposes
View preferences
{title} {title} {title}